While bunking off school Steve Jones and Paul Cook– together with Wally Nightingale – decide to form a band. Steve is singer, Paul drummer and Wally guitarist.

Until they can think of something better they are calling themselves either “The Strand” or “The Swankers”.

Glen Matlock joins as bassist. Matlock had been working in Malcolm McLaren’s shop ‘Let It Rock’. Where Steve and Paul would often hang-out; pestering Malcolm to take an interest in their band.

John Lydon (later rechristened John Rotten) is invited to audition as singer at McLaren’s shop after being spotted on London’s Kings Road, with hacked green hair and a homemade “I HATE Pink Floyd” T-shirt.

The Pistols begin to play live regularly throughout London and UK. They also play their first shows abroad in Paris.

Sex Pistols sign to EMI and release their debut single ‘Anarchy in the UK‘.

Appear on ‘Today’ show. Interviewer Bill Grundy goads the band into swearing live on early evening TV. Due to the media furore the band find themselves banned from playing live in the UK.

Sign to Virgin Records and release their 2nd single ‘God Save The Queen‘ during the Queen’s Silver Jubilee celebrations. Despite technically outselling the Number 1 record it only peaks at Number 2. Members of the band are attacked in the streets.

Record their debut album ‘Never Mind The Bollocks, Here’s The Sex Pistols‘ with producer Chris Thomas. The album is released in October and preceded by 2 singles ‘Pretty Vacant‘ and ‘Holidays in the Sun‘.

Pistols tour USA. They split up after last date in San Francisco. John returns to the UK. Paul and Steve head to Brazil to team up with Train Robber Ronnie Biggs. Sid overdoses and is admitted to Hospital.

First post-Rotten single is released. Double A-side featuring Sid Vicious’ cover version of ‘My Way’ and ‘No One is Innocent’ with Ronnie Biggs on vocals.

Sid’s girlfriend Nancy Spungen is found dead in the couple’s New York hotel room. Sid is chief suspect and is charged with her murder. He has no memory of the events.

Malcolm McLaren continues work on a film of the Sex Pistols story. Several singles featuring either Sid Vicious or Steve Jones on vocals are released to fund the film.

John Lydon begins court action against Malcolm McLaren over contract rights and unpaid moneys. A receiver is appointed to control the Sex Pistols assets, and the forthcoming film.

John Lydon’s case against Malcolm McLaren finally comes to the High Court in London. McLaren agrees to hand control of the band’s assets back to the Sex Pistols.

Appear live on BBC ‘Top of the Pops’. Banned from playing Northern Ireland on grounds of “blasphemous content”.

Release of album ‘Filthy Lucre Live‘ recorded in front of 30,000 people at their homecoming show in London’s Finsbury Park.

Release of ‘The Filth and the Fury‘ – a feature length Sex Pistols documentary containing new interviews with the band, unseen footage and archive material.

To celebrate their 25th Silver Jubilee Sex Pistols play a special show at London’s Crystal Palace National Sports Centre. They perform virtually their whole back catalogue and some surprises.

Dance remix of ‘God Save The Queen‘ by Neil Barnes (formerly of Leftfield) and the Sex Pistols is released 25 years to the day of the original release.

Pistols play North American Tour. They set up the tour themselves without the support of a record company or the music press.

John Lydon offers to take the Pistols to Iraq to play for the people (not Allied troops). Red-tape eventually scuppers the project.

Pistols are nominated – without their approval – for inclusion in the Rock and Roll Hall of Fame. They are turned down.

Sex Pistols are finally inducted into the Rock and Roll Hall of Fame. They refuse to attend and instead send a hand-written letter stating their contempt for the institution.

Sex Pistols re-record ‘Anarchy in the UK’ and ‘Pretty Vacant’ for use in ‘Guitar Hero’ video game; after it is discovered the original multi-track masters have been misplaced.

30th Anniversary of ‘Never Mind The Bollocks‘. Limited edition vinyl replicas of the LP, together with their first four 7″ singles, are released.

Headline Isle of Wight Festival and set out on the ‘Combine Harvester Tour 2008‘. Over 30 dates headlining various European Festivals.

First ever shows in Russia. First live dates in Japan for 12 years.

Release of Super-deluxe version of ‘Never Mind The Bollocks, Here’s The Sex Pistols’, including a previously unreleased studio take of ‘Belsen Was A Gas’ with John Rotten on vocals.

Pretty Vacant is featured in the opening ceremony of the London Olympics. 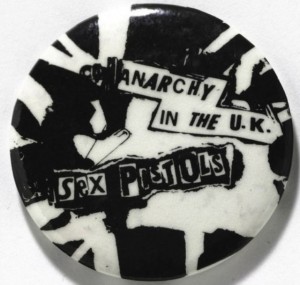