John Rotten’s alternative National Anthem. The Sex Pistols second 7″ single, and their first for Virgin Records, released on May 27th 1977. Sid Vicious had replaced Glen Matlock on bass prior to recording but does not play on the final track.

Despite popular belief, release of ‘GSTQ’ was not pre-planned to coincide with the Queen’s Silver Jubilee celebrations in June. Originally titled ‘No Future’ the track was written in 1976 and would actually have been released in March 1977 had A&M Records not sacked the Pistols after only 10 days. Some advance copies of the A&M single were pressed and are now worth a small fortune.

There are not many songs – written over baked beans at the breakfast table – that went onto divide a nation and force a change in popular culture. No one had ever dared question the Monarchy so publicly; and it wasn’t without its repercussions. Members of the band were attacked in the streets; and Government Members of Parliament even called for the Pistols to be hung at London’s Traitors’ Gate!

Even though it was banned from radio and TV – and the Pistols were branded public enemy #1 – ‘GSTQ’ stormed to the top of the charts. It technically out-sold the Number 1 record of the week (The First Cut is the Deepest by Rod Stewart) but peaked at Number 2. The powers-that-be refused to acknowledge it but the Sex Pistols were Number 1. This wasn’t a conspiracy theory, this was for real.

On June 7th – the week of the national celebration of the Queen’s Jubilee – the Sex Pistols arranged their own tribute with a boat trip along the River Thames in full view of the Houses of Parliament. After playing a handful of songs – including ‘Anarchy in the UK’ and ‘GSTQ’ – Police boarded the boat and arrested several people; including the band’s then manager Malcolm McLaren. The band had more sense than to be collared.

B-side ‘Did You No Wrong‘ does not feature on the ‘Never Mind The Bollocks’ album, but is currently available on the ‘NMTB’ 40th Anniversary Box Set (released 2017).

The single was released on 7″ only, and issued in a blue and silver sleeve (the official colours of the Silver Jubilee). 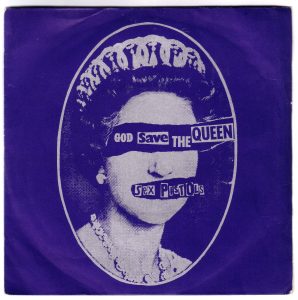