The Sex Pistols third 7″ single and arguably their best known at the time. ‘Pretty Vacant’ peaked at Number 6 in the charts and was the first Pistols record to receive any real radio airplay. Perhaps due to having less controversial content than its predecessors. Though, if the powers-that-be had noticed John Rotten cleverly subverting “Vacant” to “Va-Cunt” they might not have been so keen.

The single was so popular the promo video was controversially shown on BBC’s hitmaking ‘Top Of The Pops’ TV show. Against the band’s wishes and many BBC staff. ‘Top Of The Pops’ had previously banned the Pistols and the band were against the video being shown. However, somehow the tape found its way to the BBC, with fingers later being pointed at the record company and the band’s then management.

B-side ‘No Fun‘ – a Stooges cover version – does not feature on the ‘Never Mind The Bollocks’ album, but is currently available on the ‘NMTB’ 40th Anniversary Box Set (released 2017).

The single was released on 7″ only, and featured the iconic Sex Pistols ‘Nowhere’ and ‘Boredom’ bus artwork on the rear sleeve.

Virgin Records re-issued Pretty Vacant in various formats in 1992. The 7″ single was also re-issued in its original form as part of the limited edition Virgin 2007 vinyl re-issue series.  A picture disc version was released in 2012 by Universal. 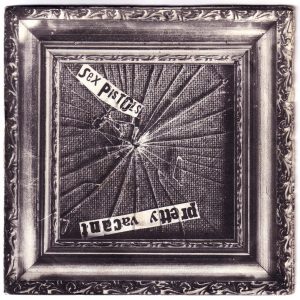