Released in October 1977 – two weeks prior to the ‘Never Mind The Bollocks, Here’s The sex Pistols’ album – ‘Holidays in the Sun’ was the Sex Pistols fourth and final single with John Rotten. Rotten would leave the band less than four months later after an ill fated US tour. It was also the first Pistols track to list bassist Sid Vicious amongst the credits; despite the fact he didn’t play on the final version.

Inspired by the Pistols “holiday” trip to the Berlin Wall in March 1977 – and the growing paranoia and hysteria surrounding them in the UK – ‘Holidays in the Sun’ was another huge hit for the band peaking at Number 8 in the singles charts.

Since the Bill Grundy controversy in December 1976 the Pistols had been banned from playing live in Britain. Two months before ‘Holidays in the Sun’ was released they decided to take matters into their own hands by playing a series of live dates under assumed names to avoid interference by the authorities. The SPOTS Tour (Sex Pistols On Tour Secretly) saw them play under names such as “Acne Rabble” “The Hamsters” and “A Mystery Band of International Repute”.

B-side ‘Satellite‘ does not feature on the ‘Never Mind The Bollocks’ album, but is currently available on the ‘NMTB’ 40th Anniversary Box Set (released 2017).

The single was released on 7″ only. The original ‘cartoon’ sleeve was withdrawn after an injunction by a Belgian travel company and was later re-issued in plain white sleeve. 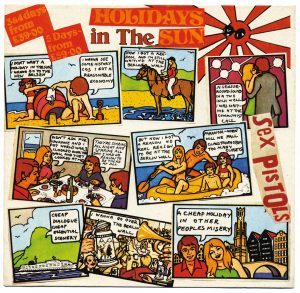