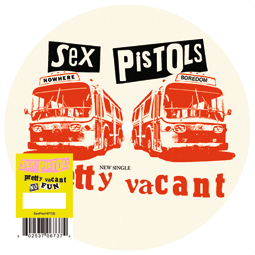 The Sex Pistols announce today that the seminal song ‘Pretty Vacant‘ will be released as a limited edition 7″ on 2nd July – 35 years to the day of its original release.

Order the single via this link…

Featuring one of the most iconic and distinctive guitar and drum build ups in the history of rock n’roll, topped by Johnny Rotten’s bite and snarl ‘Pretty Vacant’ with its anthemic “and we don’t care!” became another rallying cry throughout the country.

The Sex Pistol’s masterful third single arrived in the wake of the controversy that its predecessor ‘God Save The Queen’ spread across the UK as an antidote to the Queen’s Silver Jubilee.

Upon its original release 35 years ago, ‘Pretty Vacant’ reached the top ten in the UK charts and unlike the previous two singles – ‘Anarchy in the UK’ & ‘God Save The Queen’ – Top Of The Pops could not ignore them, broadcasting a now iconic video of the band performing the now classic song on their show. The Pistols did not appear in the BBC studio and it is widely accepted the promo video was given to the show without the band’s consent.

“This is the Pretty Vacünt press release. Thank you”. – John Lydon

Only 3500 limited edition 7″ picture discs will be available via Universal Music. Their now legendary album ‘Never Mind The Bollocks, Here’s The Sex Pistols’ will also be re-issued in September of this year as an expanded and repacked release to commemorate the 35th Anniversary of its release. More details on the reissue will follow shortly.

Order the single via this link…