To coincide with the US release of ‘There’ll Always Be An England‘ DVD, Rhino Records re-issue the US LP edition of the legendary ‘Never Mind The Bollocks, Here’s The Sex Pistols’ on 180-gram vinyl on Tuesday, October 21st 2008.

The LP is a careful replica of the original 1977 Warner Brothers release, and even includes the “Also contains Submission” sticker on the rear sleeve which appeared on first copies. ‘Submission’ was a late inclusion on the album and wasn’t listed on the original sleeve.

The US (and Canadian) version of the album – originally released by Warner Brothers Records, November 11th 1977 – was issued with pink/green artwork different to the UK version and included a wraparound paper inner sleeve featuring pictures of the band. It also had a slightly altered running order with ‘God Save The Queen’ and ‘Problems’ swapped on Side 1. The pink/green artwork first appeared on the original French release, which was the first official release of the album. Issued prior to the October 28th 1977 UK release.

The album is remastered and issued on 180-gram heavy vinyl. Hear ‘Never Mind The Bollocks’ (that’s Bollocks not BULLOCKS guys!) as it was meant to be. Give it a blast loud and proud. This is the Sex Pistols. It’s far more than trainspotter nostalgia…

The LP will be available at US retail outlets for a suggested list price of $17.98, and online via Rhino or other stockist’s such as Amazon.

‘NMTB’ was also given a vinyl re-issue in the UK in its original form (with fold-out poster and ‘Submission’ 7″ single) as part of the 2007 NMTB 30th Anniversary Vinyl Re-issue Series. 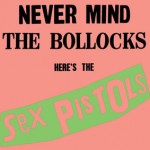 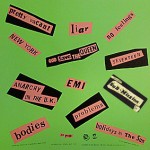 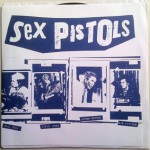 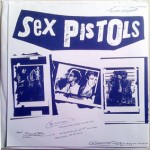 Side 1:
Holidays In The Sun
Bodies
No Feelings
Liar
Problems
God Save The Queen