Released in limited numbers at the time, this set is widely considered to be the definitive collection. This budget priced smaller-sized edition, still boasts 3CDs which include the original studio album with 1977 B-sides, a disc of outtakes and one disc of 1977 live material. Additionally there is a DVD featuring 1977 footage of the band playing live from the infamous boat party held on the River Thames, London, the Winter Gardens, Penzance in Cornwall and the Happy House, Stockholm, Sweden. Bringing it all together is a 48-page hardback book with narrative from music journalist Pat Gilbert plus rare photos from Bob Gruen, Barry Plummer, John Tiberi and Dave Wainwright.

Disc 1 uses the original master tapes from the 1977 recording sessions thought to be lost for many years. Thankfully rediscovered, the tapes were remastered, for the very first time, by Tim Young under direction from original ‘NMTB’ producer Chris Thomas in 2012. 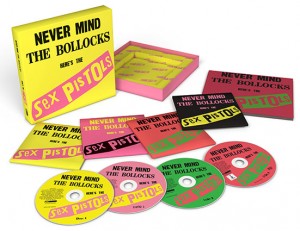 Promo Video
13. Good Save The Queen
14. Pretty Vacant
15. Holidays In The Sun